A Green Guarantee for a confident and caring Britain

The Green Party launched its national manifesto this morning and here in Newcastle we want to tell you about it.

The Green Party has big, bold ideas to create a confident and caring Britain that we can all be proud of. We aren’t afraid to hope for a better future or to be honest about how we get there. We believe in being brave, in speaking our minds, and in standing up for what matters. We are proud to do politics differently.

This is what Green MPs promise to do for you and the people and places that you love.

Let's Reimagine the City: Stand Up for Your Community

Our local manifesto launch took place against the backdrop of East Pilgrim Street, where we offer a new, radical alternative to the Council's proposed redevelopment plans. If the health, well-being and quality of life of the people of Newcastle is to be improved and maintained, we need a plan for a city that has people, communities and the environment at its heart and can cope with the challenges of the future.

Generations have seen how, in an effort to create growth, chunks of the city are continually demolished and rebuilt. It is harming our environment and providing benefit only to the big businesses whose profits do not trickle down to the people of Newcastle but trickle away from the North East altogether. 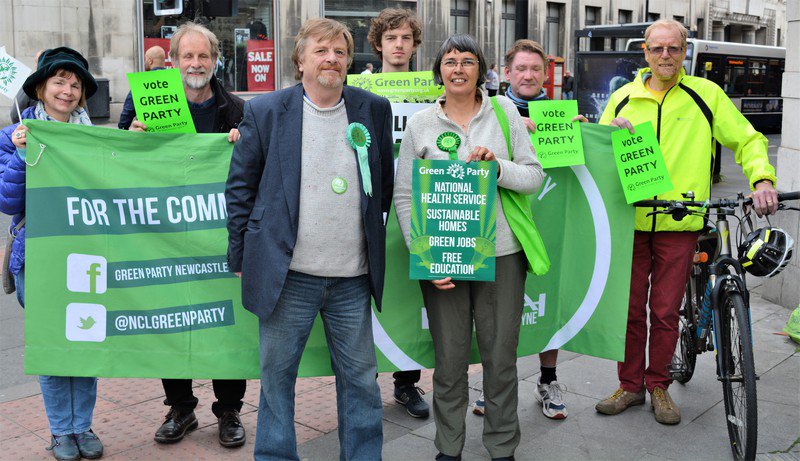 This is just a snapshot of some of our policies. You can read the whole manifesto online.  The manifesto in alternative formats (PDF, Braille, Audio, Easy Read, BSL) plus specific manifestos for the Environment, LGBTIQA+, Women and Youth are also online.

For a summary of our vision for East Pilgrim Street redevelopment, see the resources page here.

One last but most important thing of all. if you like what you hear (or even if you don’t!) as you know it is your democratic right to vote. But for those who have not registered yet to vote- please do it now. Time is very short – you have until mid-night tonight to do so – after that you will have no say on who you want to see elected on June 8th. Go to www.gov.uk/registertovote

Stand up for what matters, vote Green on June 8th.